There have been 31 commits for this month, and the statistics provide a small overview of the done work:

Bugs have been fixed, some new features have been implemented and but many ideas are still pending...

It is hard to find enough time to code everything!

The following news is based on commit ebe248f, so you can give this version of Chrysalide a try by running:

Once again the memory footprint has been reduced!

At first, the size of operands with no alternative rendering has been compressed (commit 0320d85).

Then the access lock to instruction operands (commit 12b8a06) prepares the migration to a new kind of arrays, with integrated locks and low memory footprint (commit c0b4029).

Finally the number of produced reference links between instructions has been reduced (commits 009f00f and faa334f).

A memory leak in the disassembling process has been fixed, too (commit f2f54bb).

The first change is about displayed binary raw code: its rendering has been restored (commit b3471e0, but it got hidden by default (commit c447efb) and the quantity of binary code shown for arrays has been limited (commit 9703198).

The expected behavior of the reference naming convention was restored by the commit 222c14b: the "sub_" prefix is now always assigned to subroutines and the "loc_" one to code labels.

So we leaved this initial situation:

To get this final state:

An eye candy function summary has been created based on an idea from @williballenthin. The commit b7347c9 now produces this kind of digest as tooltip: 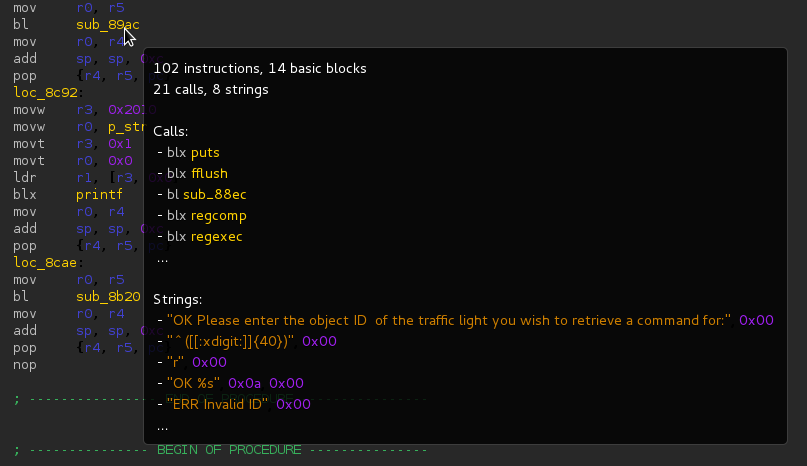 Then this has been extended to various items by the commit a2f149e: immediate operands and strings.

For routines, the number of displayed items is defined from the global configuration (commit 4f3f96c).

The last part targets immediate operand conversions: a bug in the production of binary values has been fixed in commit 78169fc. A validation in the test suite has been added thanks to the new Python bindings for immediate operands brought by the commit 4319c0a.

Initial support for the GDB Remote Serial Protocol has been added. This is a big change (see commit 94fd405).

Currently the following new features can only be reached though the Python bindings:

Rebasing a disassembled code or driving a debugging session from the GUI is scheduled for later!

Moreover, all sections which are not allocated in the memory of a running process are handled (commit b8d5a53).

This drives to new special situations, such as handling overlapping sections:

Handling more sections also pointed that the built binary portion tree was not accurate. A proper algorithm has been implemented to fix the building (commit 2409614). It adds more checks, but nothing that can be noticed at runtime.

Finally, strings are searched from extra ELF sections (".interp", ".shstrtab" and ".strtab") with the commit ebe248f.

The instruction link type meaning there is no link has been removed (commit 404c117).

The useless STP_FUNCTION symbol type has been removed and replaced by STP_ROUTINE when needed (commit e5bda75).

The connection to the database is working again: buggy code involved when updating database for connected clients (commit 94792f7) and various copy/paste mistakes in the database protocol (packing vs unpacking data: commit 1de9967) have been fixed.

The rendering of lines in the "Goto" dialog box is back (commit 88e34a0). Thus the first line content of each entry point is displayed again for instance.