Collaborative Team work is integrated in the heart of the software; it is up to the user to choose how he shares his work.

Interfaces Chrysalide is the right tool for the purists of command line as well as the GUI fans.

Innovation Reverse engineering is a complex activity that requires a great amount of intelligence and research.

Ecosystem Functionally, Chrysalide is based on Free Software and integrates as much as possible into existing environments.

More than one year has passed since the last blog post.

A lot of improvements have been committed, as the statistics show:

A small Python script has also been created to plot the development activity for 2018: 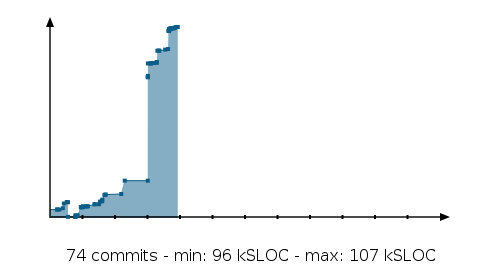 The number of past and incoming evolutions is quite huge, so here is a quick summary of three major changes.

The following article is based on commit ce43a13d, so you can give this version of Chrysalide a try by running:

There is a common point that all software products share in their development cycles: features are regularly added, code (mostly) works but at a given time some parts of the product need to be rewritten.

The root causes are multiple: refactoring, API update, aso. In the Chrysalide's case scaling was a huge problem that prevents the final user to load large binaries without many RAM available.

The last weeks have seen many improvements about this concern, so here is a few hints to make your own disassembler more memory-friendly!

The following news is based on commit 3d2576f, so you can give this version of Chrysalide a try by running: